Um…Wow. I don’t know how I survived the MotoGP this weekend. We just witnessed three of the most incredible raes Silverstone has ever seen, and top to bottom, one of the best weekends of MotoGP I can remember. During the weekend, Marc Marquez bounced back to practically cement the Championship on arguably Lorenzo’s best track, Ducati looked competitive on dry tarmac for the first time in ages as Dovi, Rossi and Pedrosa went to war, Scott Redding flying the flag for British hopes, Rabat with a career-defining ride, and Alex Rins taking revenge for Brno with a razor tight victory in Moto3…Let’s break it all down in my British Grand Prix Review! 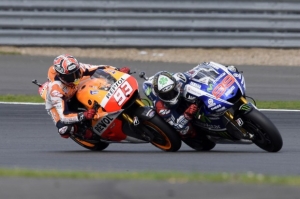 [/fusion_imageframe]What do you mean Lorenzo didn’t win at Silverstone?

And how right he was. Jorge Lorenzo is the only man in the field to have won at Silverstone more than once, and given how he’s won there three times prior, he was the top contender for Marquez today, and it showed with that Top 2 finishing eight seconds ahead of nearest threat, Valentino Rossi and their secondary scrap.

Lorenzo admitted after the race that he was at 100% from the get go, his physical condition not being ideal, and it make sense given his riding style. Regular viewers will know that Jorge loves to get the holeshot and go out as hard as possible early on and break off as big an advantage as he can, because he’s a metronome, his level of consistency is insane. But Marquez stayed with him, and as he usually tends to do, pulled the pin with about 7 to go.

But then Marquez, as he does now and again, made a small mistake and let Lorenzo back in, but with 2 to go, he nailed Lorenzo just after “Village” and it was game over as Marquez took his 11th win of the season, extending his Championship lead back to 89 points, cancelling out what happened in Brno. And of course, he breaks out the Bowler hats in Parc Ferme. Yeah, this kid is a star.

Also, good to see Jorge back to near his best, with his 4th consecutive podium and 3rd straight runner-up finish. He needs more rides like that to get his confidence back after a miserable first half of the year. Despite all that, he’s now 6-6 head to head against his team mate in Valentino, despite being 32 points back.

Speaking of which, a congratulations for Valentino on his 200… And 46th top-class race, a new record, surpassing Alex Barros, with his 8th podium of the season. I don’t know how this man still does it at 35. 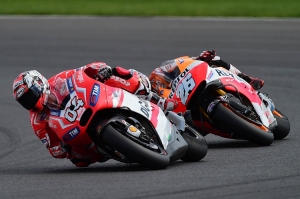 [/fusion_imageframe]Dovizioso shines again in a tale of two Ducati’s

My rider of the day has to be Dovi on this one, for what was a super human effort to get that Ducati into the Top 5 on dry conditions and ACTUALLY LOOK COMPETITIVE with the other factory bikes. We haven’t seen this since Casey Stoner was out there with a rocket ship of a bike.

I don’t know whether it was some combination of Silverstone’s tyre wear, Ducati’s updates, or just a brilliant performance from Dovi, but it was very satisfying to see him just 9 seconds off the win and refusing to drop off of Rossi and Pedrosa. I hope it’s the start of better things to come for him and Ducati, because Andrea has already proven his class on all three major manufacturers and if anyone deserves an upgrade for staying the course, it’s him.

On the other end, a very sad performance from Cal Crutchlow in 12th place. He is dinged up and it is showing. I suggested on Twitter twice over the weekend that it just be best for all parties involved to just release Cal now, let him heal up from his injuries, and shuffle everyone else up. Give Andrea Iannone his factory Ducati seat from now, let Yonny Hernandez ride this year’s bike instead of last year’s, and save Pramac some bills for the rest of the season. Because the difference between Dovi and Cal was virtually non-existent 2 years ago, now it’s a cataclysm. 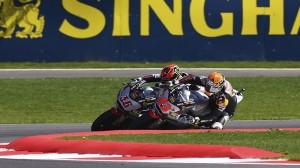 Wow. Until this race I wasn’t convinced on Tito Rabat’s racecraft. He had won five races this season, but all from pole position, so in my eyes, the jury was still out. But then Silverstone happened. This race was nuts, with a pack of nine riders leading off, including pole-sitting Johann Zarco, Mika Kallio, Maverick Vinales, Simone Corsi, Jonas Folger, and home-grown Speed Up slugger, Sam Lowes.

Kallio tried to do what he did at Indy, and that was break out and control the pace from the front, but once Vinales and Rabat broke free after Folger lowsided and took Corsi with him, they actually caught him up, with Rabat putting in the fastest lap of the race on tyres that were 14 laps old, and in a balls to the wall shoot out, it was Rabat that won in a hard-fought scrap over Kallio, with the plucky young’un Maverick Vinales a bike length back in 3rd.

This was the first time I genuinely thought Tito could hang with the guys in the top class. It was intelligent, it was gritty, it was a phenomenal performance. And please, send Maverick up with you, because he is a STUD for 19 years old. You see the Moto3 World Championship contender struggling in midfield, then you see Maverick scoring frequent podiums? The best man really did win in Valencia last year.

And finally, fantastic to see Jeremy McWilliams back on a racing grid in Moto2 at the tender age of 50. Glorious! 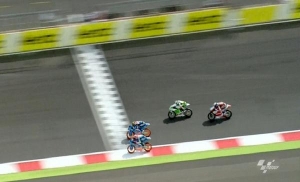 Alex Rins took his frustration from Brno out on the track in another thrilling Moto3 race. For the first 75% of the race, it was another pack of 15 with manic overtakes, making it impossible to keep up with, such as Miller, Rins, Marquez, McPhee, Bastianini, Guevara, Masbou, Kornfeil, Vinales, and more.

Eventually the Top 4 broke off with Rins, Marquez, Bastianini and Oliviera, and in an epic final lap scrap, it was Rins by literally the width of a tyre, as he and Marquez were separated by just 0.011 of a second, with the 16 year old Enea Bastianini stunning everyone in 3rd, and Miguel Oliviera in 4th, just 0.136 off the win.

With Efren Vazquez dropping, and Romano Fenati scoring a donut for coming in 16th, the title is slowly becoming more and more interesting. With Jack Miller finishing 6th, the top 6 in the Championship are covered by 54 points, and Miller’s lead himself down to 13 points from Alex Marquez, with Alex Rins another 16 back.

Also, what on earth was Karel Hanika doing after the race, apart from not paying attention? Answers on a postcard please. 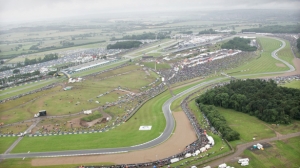 [/fusion_imageframe]So, why are we leaving Silverstone again?

So why are we leaving here then? It’s a difficult one here. I actually really like Silverstone, and it’s a shame they cut off a lot of the grandstands to limit the attendance to around 60,000 or so, when it’s easily a 120,000 plus facility, but this weekend proved it can put on some truly tremendous racing, and it’s a real shame as just as things were looking really good here, we’re going to have 3 British GP’s at 3 different venues over the next 3 years, with Donington coming back, before heading off to the new Circuit of Wales venue for 2016.

I’m not one of those guys who are particularly loyal to a circuit, I mean, I’ve never been to a live race (Yet), but I understand why it’s being done, Donington really is the spiritual home of motorcycle racing here, and while its facilities are nowhere near Silverstone’s standards, but it’s a proper bike track and much more easily accessible to the fans, and they’ve been there before. I just think it’s a bit of a cock-tease telling British fans to go all over the place for their National race. And what’s the point of going to Donington if you’re just going to leave again next year anyway? It doesn’t make any sense and confuses me more than anything else.