“The Rufea Gang completes the sweep.”

And now, part 2 of another MotoGP and F1 double header, as the MotoGP Season of 2014, came to a dramatic close in Valencia to wrap up the year. And on it, we had a slippery Marc Marquez make history and take a record-breaking 13th victory of the year, with Valentino Rossi cementing 2nd in the Championship with another exceptional ride. Further down the order, Tito Rabat giftwrapped Thomas Luthi an early Christmas present to close the year, and in the Moto3 Title Decider, Jack Miller won the battle, but it was Alex Marquez that would win the war.

All that, and more in the FINAL MotoGP Race Review of 2014…*sniffs* 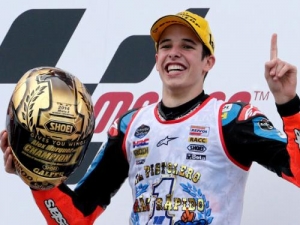 Yes, I’m starting with Moto3 for the first time ever on here, because dammit, it deserves some love. This was the real main event of the Valencia weekend, and when the dust settled, Jack Miller could do no more, taking his 5th win of the season, but it was 18-year old Alex Marquez who had done just enough in 3rd place, to take his first MotoGP World Championship, and the Moto3 crown for 2014.

It was another wild race in the division, 6+ bikes all challenging, Jack Miller and the surprising Issac Vinales leading the charge, with Alex Marquez, Alex Rins, Efren Vazquez, pole sitter Niccolo Antonelli and Danny Kent all getting in the mix, Kent even having the chance to end Marquez’s dream up the hill into the penultimate corner before having a wobble and ending his hopes.

Obviously, Alex Marquez will take the majority of the credit and he absolutely deserves it, but let’s give a salute to Jack Miller as well, who very nearly recovered a 25 point deficit with his back to the wall, in just three rounds, and rode his HEART out to take that win. His final three races with KTM were outstanding and a testament to just how good this kid is.

And for all those who were spiteful over him not being the greatest of sports over missing out on a World Championship by 2 points… Look at yourself in your mirror. Can you genuinely say you’d be all sporting and humble in defeat? I know I wouldn’t. Much has been made of Jack Miller’s attitude this season, but the one thing we all seem to love about athletes, honesty, always seems to be overlooked. Now, I’m now applauding this, but let’s be real here, I know half the people reading this post, would be exactly the same.

Congratulations to both Alex Marquez and Jack Miller for being incredible talents and providing a brilliant Championship that went all the way to the final lap. And trust me, with Alex Marquez, the sky really is the limit. 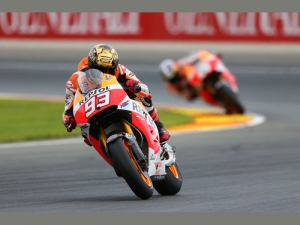 [/fusion_imageframe]Lucky 13 for the OTHER Magnificent Marquez

In the final MotoGP race of the season, it was Marc Marquez, who recovered from a qualifying crash and his worst grif start of the season in 5th, came through the field, on a track that had variable conditions, and would go on to take a record breaking 13th victory of 2014, a feat that has never been accomplished before.

(And before anyone tries to give me the Julian Ryder argument of “Mick Doohan did his 12 in 15”, I respond with, “Yeah, but who did he beat?” Back then, Honda was the DOMINANT bike, winning every GP on the calendar, and the only people to beat Doohan that year, was Criville [/fusion_builder_column][fusion_builder_column type=”1_1″ background_position=”left top” background_color=”” border_size=”” border_color=”” border_style=”solid” spacing=”yes” background_image=”” background_repeat=”no-repeat” padding=”” margin_top=”0px” margin_bottom=”0px” class=”” id=”” animation_type=”” animation_speed=”0.3″ animation_direction=”left” hide_on_mobile=”no” center_content=”no” min_height=”none”][Who despite being great, was never in Doohan’s league], and Tadayuki Okada. As much as Jules has a point, I ain’t buying what he’s selling. Today’s Top 4 alone in the Championship now have TWENTY World Championships between them.)

*coughs* Anyway, it was a funny old race, spots of rain in the air, and as a result, the track varied in levels of dampness, the Top 3 all admitting they were on the brink of changing bikes for the wet setups. Turns out the two guys who did pull the trigger were Jorge Lorenzo and Andrea Iannone, a gamble that didn’t pay off as the track never got wet enough, Lorenzo retiring, throwing away any chance he had of finishing 2nd in the Championship in the process. What did you expect from guys wearing AC Milan and Call of Duty helmets? 😉

A mention as well to the Ducati boys of Cal Crutchlow and Andrea Dovizioso for a great scrap for 4th, the Italian narrowly coming out on top. Nice to see in the 2nd half of the year, that Cal did turn it around and show he CAN handle that Ducati, with time. Almost a shame he’s leavi- Ha, who am I kidding, he’ll be backflipping on top of that Factory Honda at a moments notice. 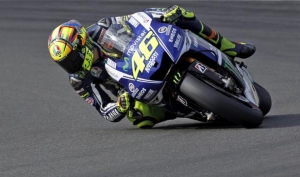 Can we just dedicate another section to the amazingness of Valentino Rossi this season? His year has almost been as amazing as Marquez’s. It was all summed up so well by commentators Keith Huewen and Julian Ryder during the race where they said:

“How do you teach an old dog new tricks?” Ryder: “Call him Valentino and show him someone faster than him.”

It’s a testament to just how incredible this man is. He’s 35 years old. This is his 15th season in the top class of Motorcycle racing. He’s had 252 races in all, and he’s STILL competitive. He’s just finished 2nd in this year’s Championship with 295 points. He’s adapted his riding style in an attempt to keep up with Marquez, and even took the ultimate sacrifice in changing his crew chief in Jeremy Burgess. And just like that, he’s top Yamaha rider, and has beaten Jorge Lorenzo, who many still consider the best pound-for-pound rider in the world (gigglesnort).

He’s one of the most incredible athletes of our generation, and I say, let’s celebrate that greatness. Both he and Marc Marquez are already legends. Instead of whining about dominance, let’s appreciate just how special these two are right now. 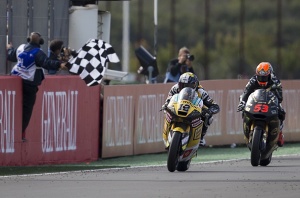 Whoops. Just when it looked like Tito Rabat was about to get the better of Thomas Luthi and take his 8th win of the season… He runs out of fuel on the final straight and Luthi gets the Christmas present from the Gods.

A lot of people thought he missed a gear, but nope, Rabat was so tight on the fuel, in his haste in spinning the rear tyres up, whoops, the last fumes of the tank were gone. Props to Luthi, as much as he probably didn’t deserve the win, he was the only guy in the same postcode as Rabat during the race, and he deserves praise for being top Suter rider this season. Which is funny considering he’s going to Kalex next year with the Interwitten/Technomag Super Swiss team.

The lack of competition from further back was probably a result of Maverick Vinales. In a desperate attempt to comeback from 8th on the grid in Quali, he got his breaking wrong and torpedo’ed poor Mika Kallio off the track at the final corner. The hilarious part of it, was Kallio giving Maverick the bird afterwards. Props to Mav for going to Marc VDS after and apologizing, even if he popped his shoulder out in the process. A small black-mark on an otherwise INCREDIBLE season for the 19-year old Spainard.

Still, a salute to Rabat, who on paper, has achieved a new record, with 346 points, he becomes the all-time points leader for a season in ANY Intermediate class. But yet, I’m not entirely convinced on just how good he is…I’ll mention this in my Moto2 season review soon.

I’d just like to add a massive thank you for everyone who’s read my MotoGP Race Reviews this season, I hope you’ve enjoyed them as much as I have. Don’t worry, I’m not done just yet, I got a whole heap more content for MotoGP coming up this month, so stick around, there’s plenty more to come. Thank you so much for reading, and check back soon!