Episode 6 of The Grand Tour heads to Colorado as the boys try to prove old Jaguars were actually pretty reliable. Sort of.

Welcome back to Dre’s Grand Tour and its time to catch up again with last week’s episode, “Jaaaaaaaaaags”. In it, the gang head to Colorado to see if old Jags were actually reliable, and… not much else to be honest. Let’s see how it went down!

Show starts off with Jezza on how being a Jag basically gives the owner the right to be a dick, such as taking all the freebies out of hotels, or taking a nice girl out to dinner and then making her pick up the bill, etc. But Jezza also makes a good point… if they’re such a “Get out of Jail Free” card, why does no-one buy them? Mr. Wilman says it’s because they’re unreliable. So, off to Colorado they go! 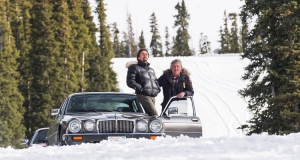 Once they’re out there, Jezza brings a Supercharged V8 XJR… which looks lovely. If you forget the fact Hannibal Lecter bought one. James had brought an XK8 Convertible. Such a lovely looking classic. We get a little bit of the usual May and Clarkson bickering, before Hammond shows up, in a 420 Mk 10 from 1967! It’s a proper Jag according to the lads, so of course, they don’t tell him that and they mock him for it! “Think of all the borrowed oil paintings I can fit in there!” Which was funny, as Hammond’s boot broke after showing it off.

They do a bit of driving, and the boys immediately all lie about their cars issues because Jaaaaaaaaaaaaaags. Also love the fact that Clarkson mentions the Kray twins, who also had Hammond’s Jag 420. As Hammond’s car develops smoke, there’s a funny line about the car getting the pipe out. Clarkson blames the Germans for their gearbox in his Jag, before they pull over for the first challenge.

Said challenge, is some laps around an off-road circuit. James goes first and quite cleverly goes really slowly to protect the car. Clarkson bragged about the 385bhp of his car and its sharp handling, as he spins twice on his lap. Richard goes last, and because he’s Richard, actually takes it seriously, breaking his car’s boot even further, and taking all the jumps at full speed. Which of course, breaks the car.

Hammond claims to have fixed the car on the road again.. Turns out, he’s brought a different Jaguar instead, an XJ6. Oops. That ends Part 1. Conversation Street and the main focus is firefighters destroying people’s cars by cutting people’s roof off their cars. Sounds silly, and it is, but it turns out they DO actually do this a lot! The new Aston Martin Vantage looks stunning as well, with a new twin-turbo V8. Oh, and a car tuning company called “Dickass Auto”. Ah. 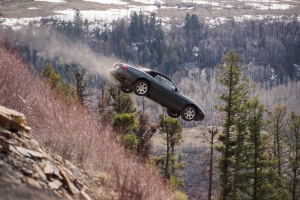 Part 2 of the Jaguar film, and the next morning, the boys escape from the hotel with their coffee machine, and a bunch of their free toiletries. Of course. As they escape, Hammond’s car can’t get going, so they try to distract the viewers by talking about one of the canyons gorges. James and Jezza plough on. Hammond reconnects, but Clarkson gets pulled over by the police. He talks his way out of it by saying he can be a dick by being British, and that he has Theresa May as his ride along. Because y’know, Jaaaaaaaag. Oh and Hammond’s fuel pump exploded. I love that an American pulls over at random and mocks him. “Why do the British drink warm beer? Because LUCAS makes refrigerators too!”

Fast forward to another runway challenge, and the cars have to go from 0-100 and back to 0 again before the end of it, because it’s a straight cliff edge at the bottom. Clarkson makes it easily. Oh good. Hammond goes next, he’s at 60 as he passes Clarkson’s mark. Hammond’s right at the end of the runway, but makes it. “How much excrement?”. He was nearly half a mile later than Jezza. James goes last, and he admits, his car is basically in “tickover” as it’s got a fundamental problem. He gets to 95… and goes over the edge. Of course.

Back on the road, James is back, in a new car, as its magically transformed into an XJS. That ends Part 2, with a teased ski resort for Part 3.

Celebrity Face Off, and this week, it’s the “Fastest Actor, who’s middle name is George”, with Luke Evans and Kiefer William Frederick Dempsey George Rufus Sutherland. Can’t lie to you, this week’s isn’t quite as good as the previous fortnight, unless you’re into old Ford Cortina’s. But I did notice Kiefer did a 1:17.8, one of the fastest times of the series so far, with only the Pietersen/Wilson pair going quicker. 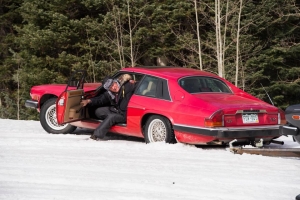 Final part of the film, and instead of skiing at said resort, the boys decide to use their cars instead. But first, Hammond claims he’s “Lord William Shaftsbury” and steals all the sunscreen, Clarkson steals a man’s clothes at the door, and drinks a ton of free Champagne, and James swaps his shoes at the store. Because JAAAAAAAAAAGS.

They shackle their cars together, as they try to climb the cliff. Clarkson comparing it to The Human Centipede made me chuckle. They jackknife and nearly go over the edge, but eventually get the hang of it. Eventually, they make it to the top, which amazingly, is 12,500ft up. You can SEE the runway they had the second part of the film on!

They slowly start to inch their way down. Steep at first, but then very narrow, and it was genuinely nerve-wracking given some of the drops were massive. There’s a lot of shimmying, but they do start getting the hang of it, and they start swerving down the hill, slalom style. It’s actually pretty cool to watch. Clarkson and Hammond even start racing each other! Jezza and Hammond make it to the bottom back at the hotel, and make it in style. James’ brakes… break, and he goes into the ditch to end the film and the episode!

This was a strange one. Episodes like the Chiron were a little bit better on the second watch. This one… wasn’t. I think it was actually slightly worse.

I think this episode suffered from similar problems to the last two weeks where a lot of the humour felt predictable. Very quickly you could tell the punchline wasn’t to try and prove “the producers” wrong, it was to embrace the fact that old Jags sucked… Which kinda made the whole thing feel a tad redundant.

On top of that, we’ve seen a lot of elements in this film before. An acceleration test with a hazardous finish has been done before. Wrecking a bad car at the end of a piece, has been done before, when James was in Romania. You could tell they were swinging for the home runs with the car replacements, but it didn’t really land.

I will however say, that the parts of them acting like complete dicks because they own Jags were pretty funny, especially Clarkson downing half a bottle of wine, then saying it was corked. Almost too natural!

The problem here is, that was a three-segment piece, which means almost the entire episode hinges on it, and with Celebrity Face Off unable to keep its usual REALLY high form, and Conversation Street being nothing special, the whole episode is just sort of… there really.

Luckily, I’ve already seen this week’s show “It’s a gas, gas, gas…” and it might be the best show they’ve ever done. More on that in a couple of days, so check back then. Thanks for reading!