Episode 2 of The Grand Tour takes the tent to Johannesburg, South Africa, where an action movie breaks out. It’s exactly what you think it is.

Hey folks, Dre here again, thanks for all the feedback on Episode 1 of Dre’s Grand Tour. Naturally, we move onto Episode 2 – “Operation Desert Stumble”, and let’s see what happens whe-

Wait… Why are you looking at me like that? Oh. You want me to talk about that joke didn’t you? *sighs* …Alright, fine, I’ll break the fourth wall for you.

For those unaware, Episode 6 of The Grand Tour came out this past Friday. In part of the show, Richard Hammond made a joke that licking an ice cream is “gay”. HURHUR, BECAUSE IT COULD BE PHALLIC. Hammond then goes on to claim that it made him uncomfortable. He even gave us the ol’ “There’s nothing wrong with it, but…” line too. BECAUSE GOD FORBID SOMETHING DAMAGE HAMMOND’S RAMPANT MASCULINITY.

First of all, not funny. At all. It’s bad enough we live in a culture where you can make almost anything seem sexual if you try hard enough, but worse yet is almost as much as the blatant homophobia involved, it just exposes how badly written the show is. What’s even creepier is that most of the audience clapped for the joke, where even Jeremy Clarkson had to say: “Why are you applauding?” Now I don’t know how much of The Grand Tour actually is scripted, but that was ridiculously awkward. It’s like you thought a punchline was coming, but it never did.

I’ve said this before, and I’ll say it again – Not enough of us want to admit that Old New Top Gear was partly appealing for its darker sense of humour. Like “Mock The Week”, where I once went off on half a dozen folks who were still salty that Frankie Boyle lost his job there after one-too-many hurtful “jokes”. There’s probably three dozen people right now complaining secretly that I’m an SJW “cuck” who needs to “man up”. How else did you think they were able to get away with it for the best part of 14 years? Especially in the shows later series, when they had to crack that barrel open more often to seem more relevant?

WE’RE the problem. We didn’t demand for better quality episodes from a team we know is capable of better. We didn’t kick up enough of a stink when the jokes got darker and more offensive. Instead, we let that platform mature. If it was a cheese, it would be classed as “extra mature”. By continuing to watch and embracing what they did, moments like Richard Hammond’s homophobia become all the more common, because in their eyes, the payoff is far greater than any potential backlash. That is unless Jeremy Clarkson doesn’t get his steak, then all HELL breaks loose.

Remember, this is a show that called Lorry drivers prostitute murders, referenced the Polish fleeing Warsaw from WW2, ripped Albanians, mexicans, the LBGT community, and tried to mumble the word “nigger” in a lost tape. Richard Hammond, rushed out a book and paid for TV ads mere weeks after an accident nearly cost him his life. And then James May offering him a tissue upon his return “in-case he dribbled”.

This is what they are. Varying degrees of shithead. And ultimately, we’re okay with it. If we weren’t, Top gear wouldn’t be the most marketable TV format ever. It wouldn’t have had 22 series and ANOTHER reboot. Amazon wouldn’t have paid £180m for their services. I just wish we were more honest about our double standards.

Oh, the drone hits a giraffe in the intro sequence. *Running Joke Klaxon* A bit of comedy to start, taking the piss out of the South African Prime Minister’s’ inability to understand place value, and his funny knack of using taxpayers money to buy fast cars. 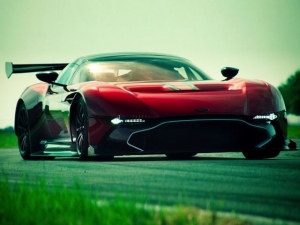 The show then starts up properly with a review of the new Aston Martin Vulcan. A 1.8 million pound, 800bhp, 7 litre V12, racing/road car hybrid that Clarkson’s 6’4”, 18 stone arse can’t climb into normally. Which he also stalls. Because bantz.

It’s a pretty decent review. I fear though that the Eboladrome doesn’t do a good enough job of highlighting the best assets of the cars they drive around it. A tight, twisty, slow technical circuit probably isn’t the best for a ridiculous car like this. Clarkson does do a pretty solid job of showing off what you get for your money – Including a full crew of Aston Martin mechanics who can tune and set up the car to your liking, and an all-expenses paid trip to a racetrack of your choice where an instructor will show you how to get the best out of it. Cool shit, very similar to the Ferrari FXX program – especially given both cars aren’t road legal.

“The American” takes it for a lap of shitty stereotype jokes, and sets a new Lap Record time of 1:15.5. I don’t expect that to get beaten for sometime. Interesting that they’re now letting non-road legal cars take part. Hmmm.

See, this review was decent. But it suffers the same problem as last week’s debut – Chris Harris did it better in New Top Gear around Abu Dhabi and emphasised more, just how ridiculous this car actually was. Again, I say this unashamedly, Harris is the best in the business and just made Jezza seem… kinda archaic here.

“Conversation Street” next. They talk about the Aston Martin/Red Bull collaboration “AMR-001”, that Adrian Newey experiment with 900 horsepower in a car that weighs 900kg, and Jeremy Clarkson compares the concept of Downforce with an elephant, or something… I dunno, I kinda tuned out here. Something about North Korea in there too, because communist, lol.

Bugatti Chiron shown off too – It looks incredible. 268mph limited top speed, because according to Hammond: “Anything more would be irresponsible on the road”. Ha. Oh yeah, and because they’re in South Africa, they have to mention their ridiculous rate of carjackings. They mentioned a British invention of a guy sticking a small explosive on a bicycle lock. Seriously.

Okay, here’s your main event for the evening, “Operation Desert Stumble”. The boys to go Jordan and a military training ground where special forces train. Terrorist infested buildings, rob a car, shut-down a plane, save VIP and survive a car chase to a nearby embassy.

The boys now have to do the same, but with a twist – Everytime someone gets “killed”, they have to start over. Basically the plot of that Tom Cruise hit, “Edge of Tomorrow”. First attempt, and Clarkson gets stuck on the rope and his trousers fall down as he gets “blown up” by a grenade. Kinda sets the tone really when 10 seconds later, James May tries asinine logic by suggesting: “Why not just land the helicopter?” Of course. 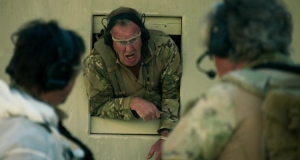 5 minutes later, Clarkson pretends that a terrorist is taking him from behind and would rather be killed. I for one am shocked at the humour in this episode. Hammond and Clarkson then have a Quali egg dinner while James May repeatedly gets shot by a sniper. In a shocking turn of events, the crate has the new Audi S8 in it, with Hammond and May following suit with a catering lorry to end Part 1 as they head to the plane.

Back to the tent, and a massive shoutout to a guy who completely rebuilt the Mercedes-Sauber C9 Group C Le Mans car, simply by using a model 1:32 version. It’s insane and I wish they had dedicated more than 60 seconds to it.

Another small video segment next of making James May look silly as he takes part in a “spinning” event as millennials make super tuned versions of road cars be able to do ridiculous donuts while playing rap music at 120 decibels. James is actually in the car for one of these as a guy gets out of his car, and someone how car is STILL doing donuts. I still don’t know how they do that. Cool segment, again, just a shame it only lasted 3 minutes.

Oh fuck, it’s “Celebrity Brain Crash” again. This time, “Charlize Theron” is eaten by a lion. A shame really that her last act on screen was making out with Vin Diesel in that Fast 8 trailer.

Part 2 of ODS now, and shock, the catering lorry makes noises. Funny joke! They actually find the VIP, but then Hammond gets shot by May for being annoying. *eye roll*. I must admit here, first time around, I got a belly laugh out of Hammond on the wing in a knife fight with a terrorist as he shouts “Let’s Dance”. Oh, and James May shoots the “Queen” in the back of the head because he hates the Royal Family. Not that I blame him.

So, then there’s the car chase, which is very choreographed and ironic because Clarkson starts reviewing the new Audi S8 while guys in Range Rovers give chase. Oh yeah, and Clarkson gets shot and “blown the fuck up” at the end and rolls over the finish line because they had to get one more action movie riff in there before the end of the piece. Tragic music and everything. That’ll do it.

This sucked. There’s no getting around it here folks. This episode was almost everything I hated about Top Gear towards the end of its “original” run. Why? Because the cars took a backseat to the presenter’s ego’s and their blood lust for their exhausted brand of humour. 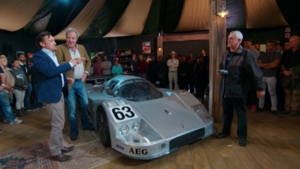 The side pieces I mentioned earlier in this episode were actually pretty solid. The Vulcan review was decent. “Conversation Street” was solid. The Sauber C9 was really cool and the “spinning” actually showed off a part of South African car culture that I had never known about. See, that’s some of the potential in this format coming out… for a grand total of about 15 minutes of a 57 minute episode.

Operation Desert Stumble was shit. I’m no comedian, but I do know that jokes often need the element of surprise, and the moment they unveiled the gimmick, I knew exactly how it was going to play out. That makes getting a laugh that much more difficult. As I said, there was a couple of ones that did land, but for the most part, this was just another Clarkson, Hammond and May egopiece to just do some fun-looking shit to them, while infuriating some of their viewers for kicking the cars to the verb on purpose, like Clarkson did with the S8 part of the film.

And don’t get me started on Celebrity Brain Punch being a running joke. Just don’t. It’s that exact sort of content that I was hoping The Grand Tour would avoid. And spoiler alert, there’s more of it coming in a couple of episodes time.

This wasn’t the worst episode, but the good stuff was either outshone on other platforms (again), or given no airtime to actually shine. Disappointing to say the least after a pretty solid start.

Anyway, hope you enjoyed the review, check back next week as the tent heads to Whitby, where The Grand Tour actually GOES on a Grand Tour, and Jeremy Clarkson’s house gets blown up. It’s not as appealing as it sounds.