Hey folks, Dre here again. For those unaware, I’m a huge fan of US Sport and journalism. And just about every major US Sporting site, has a Power Rankings column, ranking the teams in a league, as the season goes on. And I realized, there isn’t really a kind of thing for Formula 1. Maybe it’s the journalism culture. But I thought this might be a fun idea to keep track of how I rank the teams over the course of a season and build it up.

Now, it’s always a big difficult when you’re doing the first blog, because it’s to do with current form, and F1’s going through a major revamp for the 2014 season, as well as having to go back to the 2013 Season results and using that as a base. So, just bear that in mind before you troll me in capital letters because your favorite team isn’t in the Top 4. Alrighty? Cool. Let’s get started!

#1 – Mercedes (2013 finishing position: 2nd) – For the first time in 4 seasons, Red Bull look genuinely out of touch and there’s a new top dog in town. Mercedes have had minor issues here and there through testing, but without a doubt, they’re the team that looks the most comfortable out there on track. They took things one step further in Bahrain on Day 4 by even running qualifying simulations. They’ve blitzed the timing sheets, and are pretty much at the top in terms of total running (behind Williams). And without doubt, they look the strongest of the top teams so far. As a result, they pass Red Bull and take the #1 slot for now. And I don’t think they’ll be losing this spot for the time being.

#2 – Ferrari (2013 Finishing position: 3rd) – It’s not been the easiest ride for nearly every team that isn’t powered by a Mercedes engine, but Ferrari have been plodding away nicely in testing. They’ve had their hiccups too here and there, but the “best of the rest” title that Sky Sports gave them, seems to be justified. The near 300 laps of testing seems to validate that claim. Despite Kimi Raikkonen binning it early on, Ferrari taking the silent and violent approach, and so far, I don’t think they’ve done too badly.

#3 – Williams (2013 Finishing Position: 9th) – DING DING! DARK HORSE ALERT, 12 O’CLOCK! If you had told me last season that Williams have a legitimate chance of being up the front again, I’d have laughed at you and told you to stick to football. But Williams are looking like the most reliable car in the field at the moment. Personally, I think that’ll be the biggest factor for team success this season, given the unpredictability and complexity of the 2014 cars and technology. And Williams are 1) The ONLY team to have not had a red flag retirement in testing so far, and 2) Lead the entire field in sheer miles logged. Williams approach is slow and steady, and right now, that could be the way to go…

#4 – McLaren (2013 Finishing Position: 5th) – Beware, McLaren look like they’re back with a vengeance. Again, not a completely smooth testing run in Bahrain, but again, they look smooth, and solid so far, which is more than what can be said for the majority of the teams running. Kevin Magnussen was setting some good times too, and looks like he’s fitting the McLaren system like a glove so far. Of course, we’re yet to see them in a race environment, and Jenson’s playing down the team’s chances, but so far, I don’t think McLaren have much to worry about for now. I think they’ll be pleased with their progress so far, especially given their 2013 campaign.

#5 – Force India (2013 Finishing Position: 6th) – Again, so far, pretty much so good for Force India, in their most important season in Formula 1 to date. As with many teams, a few niggles and a blowout here and there, but with over 200 laps logged in so far, and even Hulkenberg topping a timing sheet, Force India are looking very solid on that Mercedes power, and them doing longer runs are putting them in good stead. 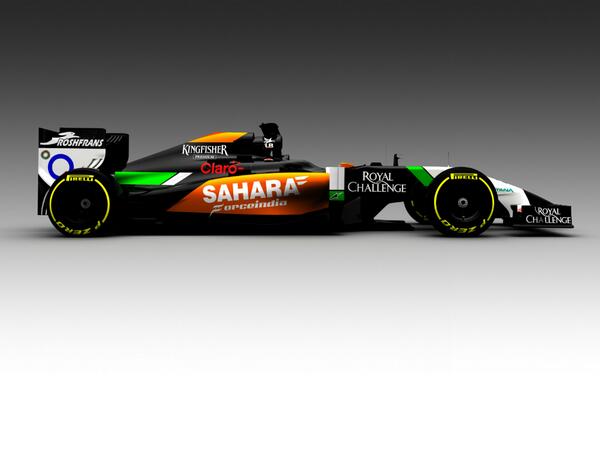 #6 – Sauber (2013 Finishing Position: 7th) – Sauber again looked solid in testing here, racking up 240 laps and just the 1 hiccup. Running longer runs and doing Quali runs, is good. However, the upgrades don’t look substantial at all. It’s the lack of speed that keeps Sauber at 6th for now, right in the middle of nowhere.

#7 – Red Bull (2013 Finishing Position: 1st) – Wow. What a greek tragedy. Who would have thought the reigning Champions would look this awful with 19 days until the season officially starting? They’ve been nursing problem after problem since Jerez, and when they fix a problem, another one comes up. Being 9th in running is awful for a top team, and they have a LOT of catching up to do, so much so that there’s even been talk of a B-Spec car being introduced for the Spanish GP in May. That would be incredible, in the worst possible sense. Even Adrian Newey’s had to go back to the drawing board twice now to sort out RBR’s issues with their charger. They’re running out of time and with Australia just two weeks away, Newey needs to get his thinking cap on, and fast.

#8 – Toro Rosso (2013 Finishing Position: 7th) – The sister team’s had issues as well, but not to the same degree of the senior team. Their issues seem to be more to do with their drivers not being able to handle and get to grips with the car properly. We’ll have to see how things go, but even RBR’s sister team seems to be struggling.

#9 – Lotus (2013 Finishing Position: 4th) – Lotus didn’t have a particularly bad first Bahrain test, but it’s all unravelled at test 2, with barely any time ran in the car, fire’s, and upgrade parts that have failed. No team has had a testing period worse than them. They’re only at #8 right now because of the lack of pace of teams below, otherwise, they would be even further down the order.

#10 – Caterham (2013 Finishing Position: 11th) – Caterham take the #9 slot for being the most reliable and consistent of the Renault runners so far, getting some real run time in, and racking up the laps. Their overall pace is yet to have been seen, but Caterham is walking proof that Renualt can he handled in the early going.

#11 – Marussia (2013 Finishing Position: 10th) – Oh dear. For a team that actually got money last year for not finishing last, you’d think they would be in a better position than where they are right now.  They’re probably on their own drawing board right now as we speak.