Should Dani Pedrosa have been extended?

“The curious case of not being quite good enough…”

I feel for Dani Pedrosa. I’ve always felt he’s had a bad break for essentially, not being a Hall of Fame level rider. But despite all this, Repsol have stood by him, ever since his MotoGP debut back in 2006. And entering his 9th season, Honda have decided to extend his contract for another two seasons, keeping him with the factory team until the end of 2016, and beyond his 31st birthday.

He’s not the first extension we’ve seen this season, as Valentino Rossi was just extended this past week. The difference is though, Valentino Rossi’s 2014 season has been so good, Yamaha HAD to re-sign him, with him consistently challenging for wins and podiums, and has thoroughly out-raced his established team mate in Jorge Lorenzo. And hell… He’s Valentino Rossi. Would YOU want to be the guy to tell him “No?”

On the other hand, the announcement of Dani Pedrosa’s extension has caused a TON of debate as to whether he deserved the seat going forward, and whether Honda have been “Playing it safe”, instead of rolling the dice on someone else younger, and possibly hungrier. So, let’s break it down, should Pedrosa have been extended? Here’s my two (and then some) cents.

[/fusion_imageframe]Dani Pedrosa, in my eyes, should have Multiple World Championships. I just feel like he’s been extremely unlucky to have raised, developed and matured in an era where there’s been 4-5 guys that might just be a little bit better than him, and those guys, like I said earlier, are Hall of Fame level talent. The level of rider in MotoGP the last 5 or so years has been UNHEARD of, and it’s only getting better.

For instance, there’s been Valentino Rossi, a guy who’s arguably the greatest rider since Agostini and Hailwood, and has over 100 career wins. Then there’s Casey Stoner, another Hall of Famer, who won two Championships, with two different manufacturers, one of which on a near unbeatable Ducati, the other one on the same Repsol, kinda proving that Pedrosa just wasn’t as good.

Then there’s Jorge Lorenzo, who turned the Yamaha team into winners again, is a Double World Champion and has been the top contender in the sport ever since his 2nd year, not finishing outside of the Top 2, a true level of consistency unseen seen Rossi won 5 straight.

And now, there’s Marc Marquez, who might very well be the greatest natural talent that this sport has ever seen. Who at just 21, has already won over half the top class races he’s ever entered, and who is youngest… well, everything, in MotoGP history. 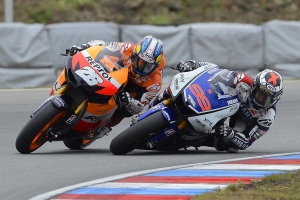 [/fusion_imageframe]So where does this leave Dani Pedrosa in this golden era? He’s been the guy who’s been consistently good, but never truly great, always stuck as the bridesmaid, and never the bride as someone a little bit better just pips him to the post. But he’s always been a title contender, but as time has gone by, the general chant of “When will be it Dani’s time?” has piped up.

Is that considered a failure in the eyes of Repsol Honda though? This is a rider who’s won 25 races in the top class, and who has been in the Top 3 of the World Championship on SEVEN different occasions. Yet, many a fan wants him to move along. Is that a failure, given Honda’s factory is considered the strongest in the field? Debatable. But what else does Honda do?

Repsol are in a rather fortunate scenario here. They have Marc Marquez, the phenom, the guy that gives the best possible chance of winning a race. But they have also have (accidentally), a really solid #2 guy, who’ll rack up the points in the background, win you the team title, and challenge for wins on occasion. Pedrosa has improved – His last two seasons were the first time(s) he’s scored 300 points or more in a season. So why would a team risk things and break up a winning combination?

However, I too see the fan standpoint – I’ve seen a lot of fans becoming bored of MotoGP now Marquez is so dominant (For whatever reason), and they want to see what younger, more exciting talent can do on stronger bikes. I’d be lying if I didn’t agree with this way of thinking, my Hashtag of #GetAleixABetterBike is legendary on Twitter as it is, and as I’ve said before here, that 2nd tier of talent is brighter than it ever has in this sport. Bradl, Bautista, Crutchlow, The Espargaro Brothers, Iannone to name a few, not to mention the lower classes of Rabat, Vinales, Salom, Aegerter, Miller, Fenati, Rins and Alex Marquez too.

A lot of Motorsport fans only really care about the top though, and we’ve had the same dominant four for many years now, only with Marc Marquez now in Casey Stoner’s position. And we’ll never truly know how good the midfield are until they’ve been given an opportunity right at the top, especially with Repsol not going back to running 3 bikes like they used too, with Dovi getting the 3rd seat. And don’t get me started on Toby Moody’s “Dream Team” of Jorge Lorenzo and Marc Marquez on the same machinery.

But here’s the problem – What if you bring in a younger guy, like an Aleix for instance, and the team doesn’t go anywhere in the medium term, where do you go from here? Do you just cycle out younger guys hoping one can beat Marquez? Because ultimately, trying to find someone close to his level is the only way the team is going to be better than what it is right now. And quite frankly, I’m not even sure that person even exists at the moment…