This season continues to get ridiculous. What is it with Assen and throwing something ridiculous up? It happened again this weekend, with changeable conditions, a competitive Cal Crutchlow, Valentino Rossi’s heroics from the back, Jorge Lorenzo falling backwards again, Dovi shining in the wet, a shock win for a guy 11 years after his last trip to the top of the podium, but with one famiilar name on the top step… #LikeAFish. 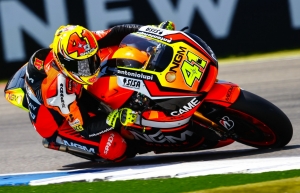 Remember F1’s Canada 2011, and how the fact it rained on and off for the entire race caused utter carnage? Well, Assen got the same dose on this one. This went back to qualifying. Moto2 and 3 were largely unaffected, but a ten minute rain flash between Q1 and Q2, caused mayhem, with all 12 bikes on circuit together, trying to space themselves out for a big lap, Marc Marquez with the craziest double overtake you’ll ever see… And only came second as Aleix Espargaro got the space needed to nail a lap and take the Open Classes’ first ever Pole Position.

The rain had bumped Crutchlow up to 5th, but it was the Yamaha factory team that got caught out again, with Lorenzo qualifying 9th, and Rossi 12th, an extremely disappointing showing given how many touted Rossi for the win.

I have to give the FIM and Dorna some credit, they do a REALLY good job in changing the rules on the fly whenever freak circumstances show up, and they did another great job as the rain came again during the grid walks, and they gave the option of an open pit lane, and two extra sighting laps so the riders could get a gauge of whether the track was better with wet tyres, or dry. Pretty much everyone chose the wets, especially Pol Espargaro and Valentino Rossi, who changed their minds at the last possible second, and started from the pit lane on the wet tyres.  Madness.

And of course, during the race, the track dried up enough that within 7 laps, 90% of the field had switched bikes back to the dry tyres, and the form of the field had shifted again. Amazing how these things turn out, and the back and forth nature of the weather was what made this one special. 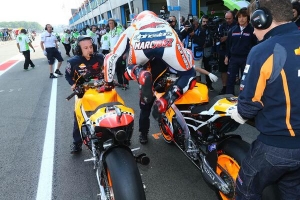 [/fusion_imageframe]As for the race itself…

Okay, seriously how do you beat Marc Marquez? This time, the MotoGP gods gave him what’s normally a ridiculously tough combination – Andrea Dovizioso, a super-stiff Ducati, AND rain, AND he made a mistake on his out-lap, and he STILL won by 7 seconds. I’m starting to think the only way to beat Marc is to decapitate him. With his latest win to go 8 of 8 for 200 points he became the first rider since Giacomo Agostini back in 1971 to win the first eight grand prix’ of a season. We have to start asking the question, can he achieve the perfect season?

Props have to be given to Dovi on this one as well. He’s stuck with an average Ducati bike but it (and himself), always seem to come alive whenever it rains, and that was a superb performance to finish 2nd given the circumstances.

And further back, Valentino Rossi showed his class once again with a sensational ride from the pit lane to finish in 5th.  He was carving through the field the whole way through and it’s a testament and centrepiece to his redemption year, he’s been as good as I’ve seen since his last World Championship. Props to Andrea Iannone continuing his great season with a 6th, career high finish.

More awesome news as Broc Parkes came out of nowhere to finish in 11th place, sealing the best ever finish in MotoGP for Paul Bird Motorsport, a lovely moment as the team have worked so hard to get more performance out of the customer bike. And he even finished ahead of… 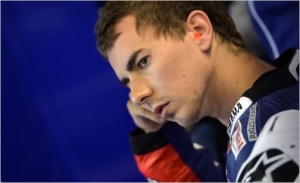 [/fusion_imageframe]Jorge Lorenzo may have kissed his season goodbye

It’s not entirely his own fault. I was mocking Jorge on Twitter for finishing in 13th place, an awful result for a rider of his calibre, but then he was incredibly honest in the post-race interview, admitting that he was scared in the rain, due to his horrific crash last year, that damaged his shoulder blade and probably cost him the Championship.

I feel for him, that accident must play on his mind… BUT… 13th, and nearly half a lap down on the winner is just not acceptable. Never going to judge someone for how they deal with grief and negativity, but man, that may have been the final nail in the coffin for Jorge’s season. He now lies back down in 5th, 119 points back from Marquez through eight races, and nearly 50 back from his own team mate in Valentino. If this form continues, it’s going to make a lot more people question the Double World Champions’ temperament. 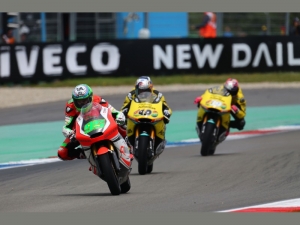 The last time Anthony West was on the top step of the podium, was the ONLY time Anthony West was on a top step of a podium, and it was this very GP… Back in 2003! But it was a majestic performance by the Aussie, coming through from 23rd on the field to win after leading pair Sam Lowes and Simone Corsi both hit the deck during the middle of the race. He earned it too, having to hold off the threats from Maverick Vinales and Mika Kallio towards the end, whereas Championship Leader, Tito Rabat, was super conservative in 8th… Not sure it was the right call.

Rabat’s been the guy in Moto2 so far, but to only have a 26 point lead through 8 rounds is a little surprising isn’t it? It certainly caught me by surprise when I saw it. I’m sure Tito will be back to his best in Germany, and if this season’s anything to go buy, the rookies and other top Moto2 talent will trip over each other trying to play second fiddle, which in Rabat’s case, is definitely a good thing. 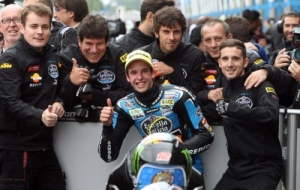 The Moto3 season started with Jack Miller looking like he could run away with it while the Spanish committed civil war on each other. Then Romano Fenati started to dig in as a viable contender while Alex Rins slowly got back to his old pace. Now, Alex Marquez has dominated the last two races, and with Fenati down in 18th, and Miller failing to finish, Marquez has launched himself into a genuine title contender, and he’s not the only one…

The Top 5 in the Championship are separated by just 15 points. Jack Miller (117), Romano Fenati (110), Alex Marquez (110), Alex Rins (107), and Efren Vazquez (102), are all still in the hunt, and on their day, all are capable of winning races and challenging. And that’s not even including Enea Bastianini’s rapid improvement either.

We could be on track for the best and most competitive Moto3 season since… Last season actually, ha. I thought the division might struggle compared to last year. Maverick Vinales, Luis Salom and Jonas Folger all moved up, and it seems to have actually made the division better with how competitive it’s been.

Let me know what you thought of Assen, in the comments!